Spurs thumped five goals past Everton on Monday and with this peak confidence they will now take on Manchester United at Old Trafford.

This Premier League tie will be important to determine who will challenge for the top four race because whoever loses on Saturday will suffer a major setback in securing that final Champions League spot. The Gunners are currently favourites to land the fourth spot and out of United and Spurs whoever wins on Saturday will likely be the other contender.

Conte has won four of his previous six encounters with Manchester United and given how poorly United played against Manchester City, there’s no denying that Spurs are the favourites to win on Saturday. The Lilywhites’ graph has been going up and down in recent weeks but Man United look completely out of ideas so if Conte can set up his side well then they will easily pick up all three points.

Tottenham only have a few players missing with injuries but we don’t think Conte will be too eager to make any unnecessary changes to the starting line up which defeated Everton on Monday. United have been struggling to score goals so if their defence can hold Ronaldo and co then the Spurs forwards will ensure they go back home with all three points.

Cristian Romero was taken off in the 52nd minute against Everton but the substitution was not because of any injury but rather to protect him from being sent off.

Romero will return to the starting lineup against Manchester United, alongside Eric Dier and Ben Davies.

Ryan Sessegnon though picked up an injury on Monday and it looks like the player will not be fit to play at Old Trafford. He looks to have picked up a muscular injury and if he is not available then Reguilon will play as the left wing-back.

Speaking after the Everton win, the Spurs manager updated: “Ryan we have to make evaluation. It is a muscular problem. I hope nothing serious because every time this player is having continuity of performance and then something wrong or little injury.”

Oliver Skipp is ruled out with a groin injury and Harry Winks will remain on the bench since Conte seems to have put his faith in the pairing of Bentancur and Hojbjerg.

Dejan Kulusevki has made an instant impact signing joining Spurs in January and right now he’s keeping Lucas Moura on the bench.

Son and Harry Kane are the trump cards for the North London side and they will be licking their lips given how poor the Manchester United defence played against Manchester City. 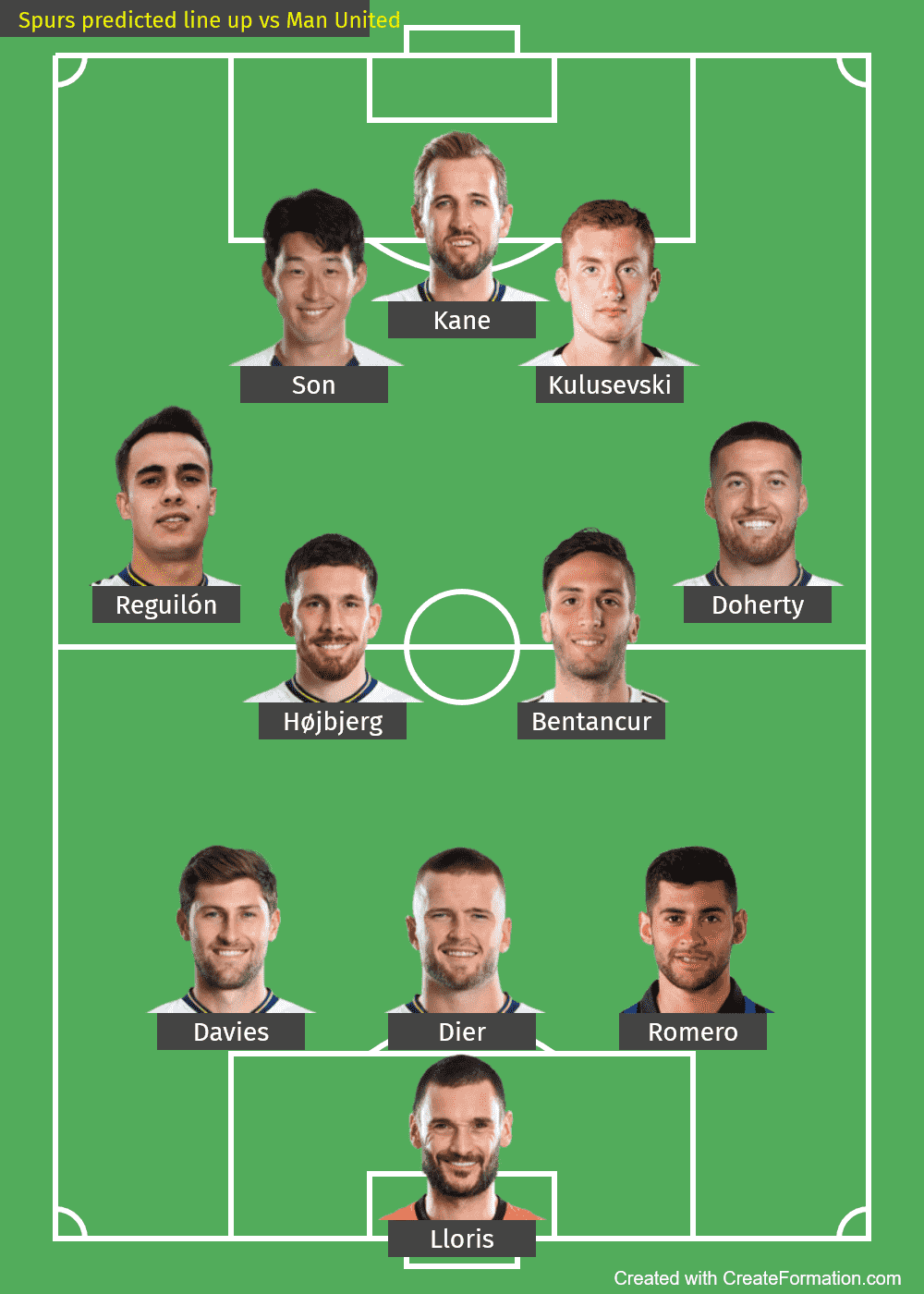 Read: Conte makes an honest admission regarding the top-four race.