Spain managed to take their semi-final draw of the European Championship all the way till the penalty shootout but in the end, Italy held their nerves to win it 4-2.

Courtesy of that 4-2 shootout win, the Azzurri’s will be playing in their 10th major final(their fourth EURO final) when they face England at the Wembley on Sunday.

Roberto Mancini has managed to transform this side in the past couple of years but on Sunday the Italians will face a solid defensive side, something which has been their forte historically.

Italy are undefeated in their last 18 matches in the European Championship but they will be going into this match as the slight underdogs, simply cause they will be playing infront of a hostile Wembley crowd.

But, players like Bonucci and Chiellini have seen and done all of this before so England are expected to have a really tough time in breaking down the Italian defence.

The Azzurri’s have lost their previous two finals(EURO 2000 and EURO 2012) but England will be playing in their first ever European Championship final so the Southgate’s side might take some time to settle their nerves on Sunday.

Donnarumma has become the perfect heir to Buffon and the 22-year-old will start in goal on Sunday at Wembley.

The partnership of Bonucci and Chiellini has been a class apart for Italy in this tournament as rarely have players gotten past them. Now, they will have to make to they can shut out players like Harry Kane and Raheem Sterling.

Leonardo Spinazzola has undergone surgery to repair his torn Achilles so he will be the major absentee on Sunday. Thankfully Emerson did a pretty good job against Spain and the Chelsea man will reprise that role against England as well.

Jorginho and Verratti have formed a formidable partnership in the middle of the pitch and they will once again be supported by Nicolo Barella. Jorginho was the standout midfielder for Italy in the semi-final managing to win five duels in defensive midfield.

Federico Chiesa scored a brilliant long-range goal against Spain but he had to be taken off in the penalty shoot-out owing to fitness concerns. Hopefully the 23-year-old is fit to start on Sunday, if not then Berardi will come into the side to replace him.

Ciro Immobile had a good enough game in midweek and he along with Insigne are going to keep their place in the starting line-up against England. 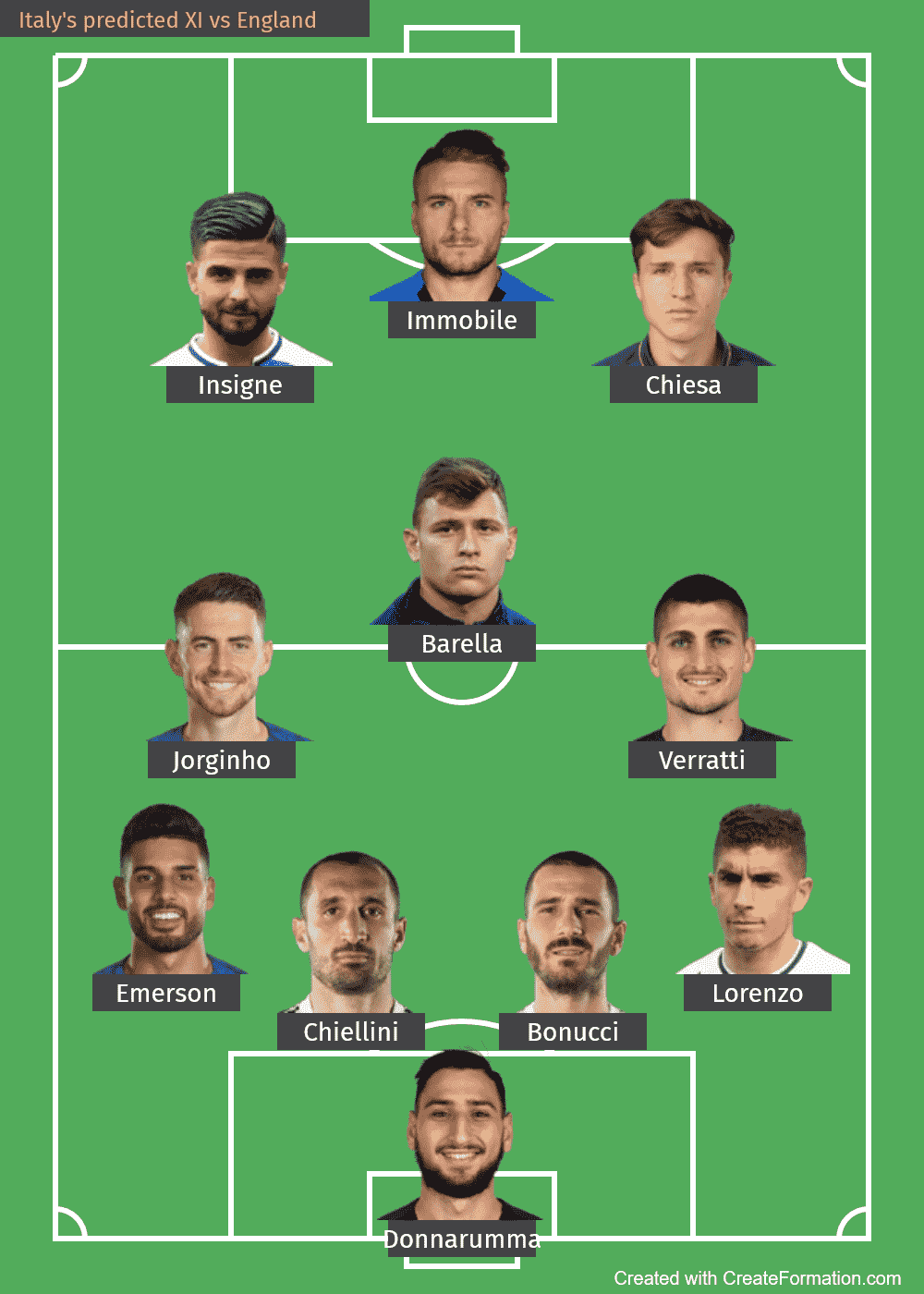 Read: England found guilty of three misconducts in the semi-final.

Read: England could very easily fall into the Italy’s generation old trap in the final.

Read: Jose Mourinho predicts this player to start for the Three Lions against Italy.

4-3-3 England’s predicted line up vs France: Will Raheem Sterling return?

4-2-3-1 Brazil’s predicted line up vs Croatia: Will Sandro come back into the side?

4-3-3 England’s predicted line up vs France: Will Raheem Sterling return?

England blew away Senegal in the Round of 16 and that 3-0 win has now set them up for a lip-smacking tie...
Read more

England beat Senegal while France knocked out Poland in their respective Round of 16 ties and these two giants will now face...
Read more

England take on Senegal in the Round of 16 and there are growing fears that Gareth Southgate's team could be the next...
Read more