Scotland suffered a 2-0 loss at the hands of Czech Republic in their opening game of the European Championship and next up, they take on England.

The two sides have not faced each other for four years but the last time they met, Scotland managed to hold onto their cross-border rivals to a 2-2 draw. But the Three Lions have kept a clean sheet in their previous four European Championship games so we expect this to be an uphill battle for Steve Clarke’s men.

Scotland are currently last in their group so they will need to go all out and pick up all three points if they want to have any chance of qualifying for the knockout stages.

Manager Steve Clarke has a few injury concerns and he will also need to make some tough selection calls for the second game since a loss on Friday will effectively end their European campaign.

The manager is once again going to use a 3-5-2 system so Grant Hanley and Jack Hendry are going to keep their place in the starting line-up.

Kieran Tierney missed the Czech Republic game but Clarke will be hoping the Arsenal man can be fit to play against England. If the left-back is not ready then Liam Cooper will retain his place in the Scotland line-up.

Billy Gilmour remained an unused sub for the opener and reports suggested the midfielder was not fully fit to play. We don’t expect the youngster to start on Friday either meaning McGinn, Scott McTominay and Stuart Armstrong will start in midfield once again.

Andy Robertson was one of the standout players during the Czech Republic loss and he will reprise his role as the left wing-back against England. Stephen O’Donnell had an underwhelming game during the opener and it will not be a big surprise if he is replaced by James Forrest.

Southampton’s Che Adams was a surprise exclusion from the starting line-up on Monday but we expect him to come into the Scotland line-up against England, replacing Ryan Christie. 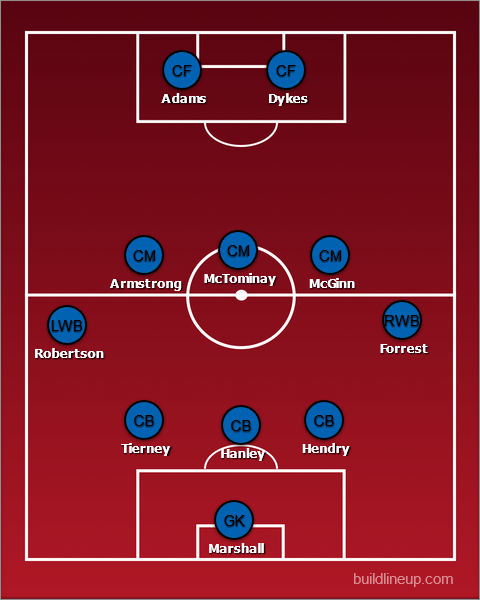 Read: Here’s why this world-class centre-forward might remain unsold this summer.

Read: Who will be England’s first-choice left-back for the remaining tournament?

Read: Rangers are the first club to make a move for this 23 Y/O Celtic transfer target.